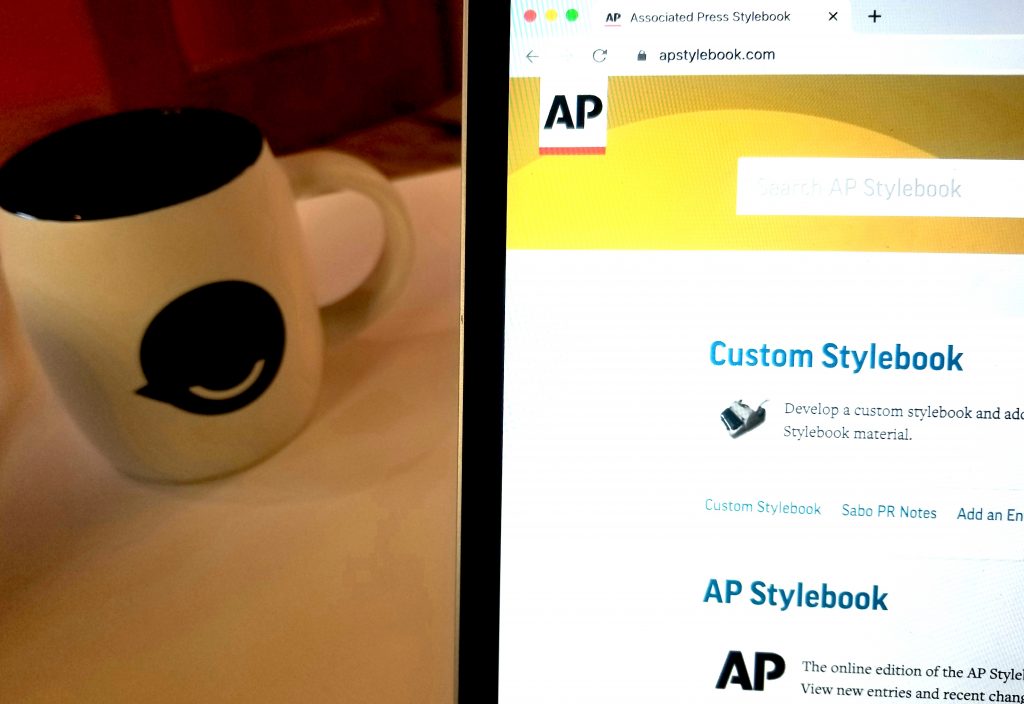 The Associated Press Stylebook is widely used as a writing and editing reference for the PR and news industries. It dictates everything from acceptable word use and jargon, to grammar, spelling and punctuation. While the intent of the AP Stylebook is to ensure news writing style is uniform across outlets, its guidelines can be helpful for anyone who wants his or her writing to be concise and objective.

As public relations professionals, we generally defer to AP Style for all our written work. We stress the importance of following its guidelines for press materials in particular because we know the media appreciates it.

If you’re new to the style, it may feel a bit odd in some instances. AP Style can run contrary to standard business practice. For example, most titles are not capitalized, and courtesy titles are not used. Last names rather than first are used on second and subsequent references. How numbers are written varies by use. Parentheses aren’t used for acronyms, and acronyms are not used on first reference.

But once you get used to writing this way, you’re likely to increase the chances of getting your work published. When you have all the AP Style items correct, you make it easier for journalists to copy and paste, rather than spend what limited time they have editing your story.

Is it time you brushed up on this tried-and-true writing manual? Let me share a few rules to freshen your memory. Whether you’re new to AP Style or seasoned, I hope you find this list insightful.

To use or not to use the Oxford Comma … that is the question.

Though hotly debated, AP has long said not to use a comma before the last item in a simple series. For a series of complex terms, though, it is OK to use commas after each for clarity.

When should months be written out or abbreviated?

When a month is used with a specific date, abbreviate all except the months with five letters or less: My birthday is Dec. 3. My brother’s is June 5. Spell them out when using alone or with a year alone. My birthday is in December.

When is the year necessary in a date?

When a phrase refers to a month and day within the current year, you do not need to include the year. If the reference is to a past or future year, include the year and set it off with commas. For example: Feb. 14, 2025, will be the launch date.

Is it up to date or up-to-date?

AP Style says to hyphenate when it’s a compound modifier before a noun: We bring you the most up-to-date news. Otherwise, no hyphen: My calendar is up to date.

Do I write out percent or use the sign?

For its 2019 edition, AP Stylebook announced we should use the % sign instead of writing out the word when paired with a numeral. This change takes some getting used to since it was opposite for several years.

When is it OK to use & in place of the word and?

It’s recommended we only use the ampersand when it is part of a company’s formal name or composition title. The ampersand should not otherwise be used in place of and, except for some accepted abbreviations, like B&B.

What’s the stance on italics?

How should I write time spans?

When referring to a time span, AP prefers the use of a hyphen or dash without extra spaces, such as 2:30-5 p.m. Using “to” is also correct, just not preferred because the hyphenated version is more concise. When a time span crosses noon or midnight, include both a.m. and p.m. abbreviations: 8 a.m.-5 p.m. or 8 a.m. to 5 p.m.

Should there be one space or two after a period?

While not in the Stylebook, the Associated Press uses one space between sentences.

How should I capitalize my headlines?

Did any rules surprise you? Or did you know them all? Keep in mind, there are often exceptions to AP rules, as well as updates and new clarifications to keep up with trends or changes in language. For this reason, you should regularly check the Stylebook. I enjoy the online version for its quick search capability and the comfort of knowing it has the most up-to-date information. It’s also a good idea to follow AP Style on Twitter or Facebook, if you aren’t already!

While the AP Stylebook is broadly accepted, it’s not uncommon for organizations to have their own editorial style guidelines that mostly follow AP Style with some exceptions. That said, if you want to speak the same language as the news outlets you are pitching, AP is the way to go.

At the end of the day, my advice is to pick a style and stick to it. What is most important is that there is consistency and continuity in all the content you produce.