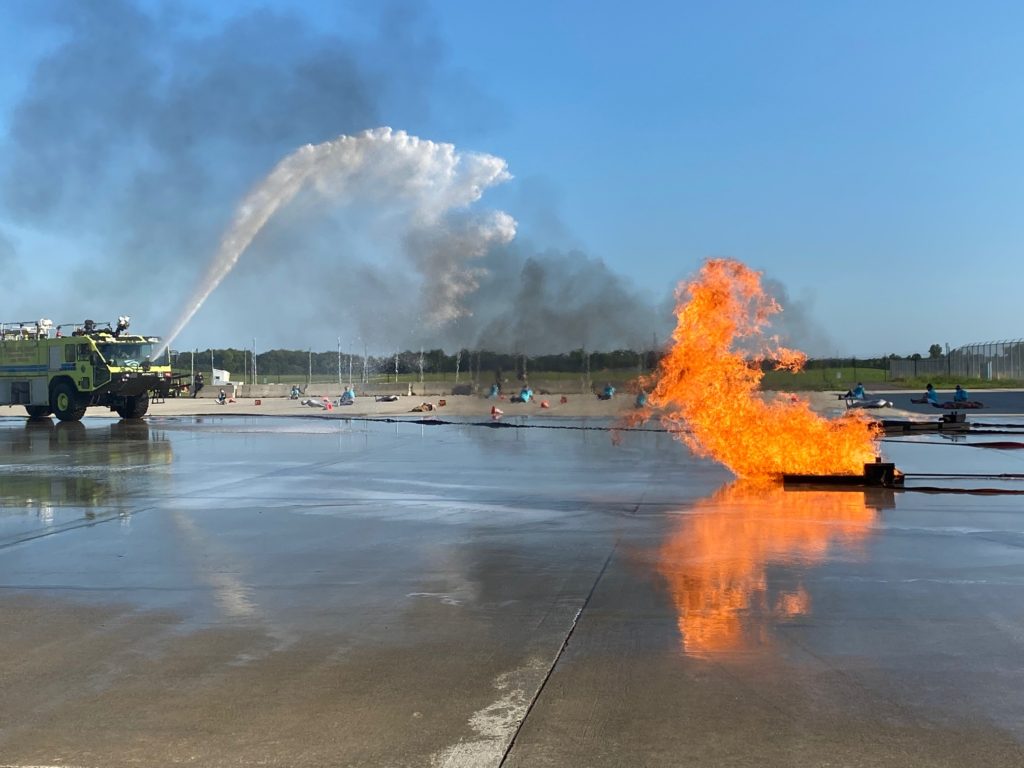 “Okay, we need a media statement.”

And with that, the training exercise my team and I were filming for the Gerald R. Ford International Airport expanded to include – me and my team.

Requests from clients for media statements are a daily occurrence at Sabo PR. During our current global pandemic, that’s shifted to hourly – and sometimes more frequently – as the organizations we represent respond to ever-changing conditions.

We sometimes have the luxury of a few days to craft not only a media statement, but the other supporting communication tools: board call scripts, shareholder notifications, team meeting talking points, intranet copy, web content, social media posts and other tactics needed to ensure key stakeholders are informed before the media. Often, we may only get a few hours of advance notice.

And on days like this particular Friday, we were working in real time.

I had been joined on the Ford Airport tarmac by my colleagues Hunter, Brian and Chiara. We were called to capture in pictures and words the triennial training exercise mandated by the Federal Aviation Administration. This would be the mother of all disaster drills, and the worst nightmare of any aviation executive: a plane crash with an undetermined number of passengers and crew on board.

We had joined teams from the Ford Airport Authority (fire, police, operations, communications and maintenance) along with a dozen external agencies (including our clients, Cascade Township and Kentwood) for the 90-minute simulation that would test the preparedness, training and response of all. 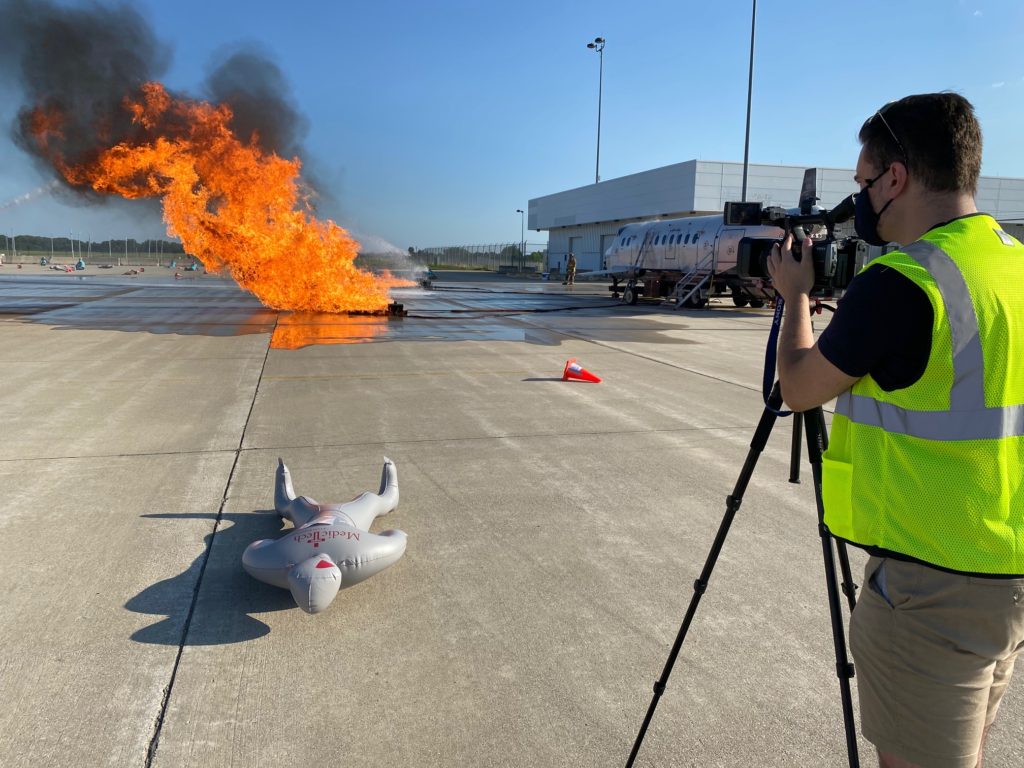 With a single phone call, we went from observersto participants. The scene around us was controlled chaos – crews from multiple fire departments were putting out fires on a simulated fuselage while “rescuing” the crew and passengers on board, including a number of infants and children. Forty-foot flames were raging, Pre-recorded screams pierced the air. The tarmac southeast of the main terminal was a field of the wounded, requiring first responders to assess and triage those needing the most care first. One passenger lay dead, a few yards north of where Brian and I were filming. A fleet of ambulances stood by to whisk the injured to area hospitals for treatment. 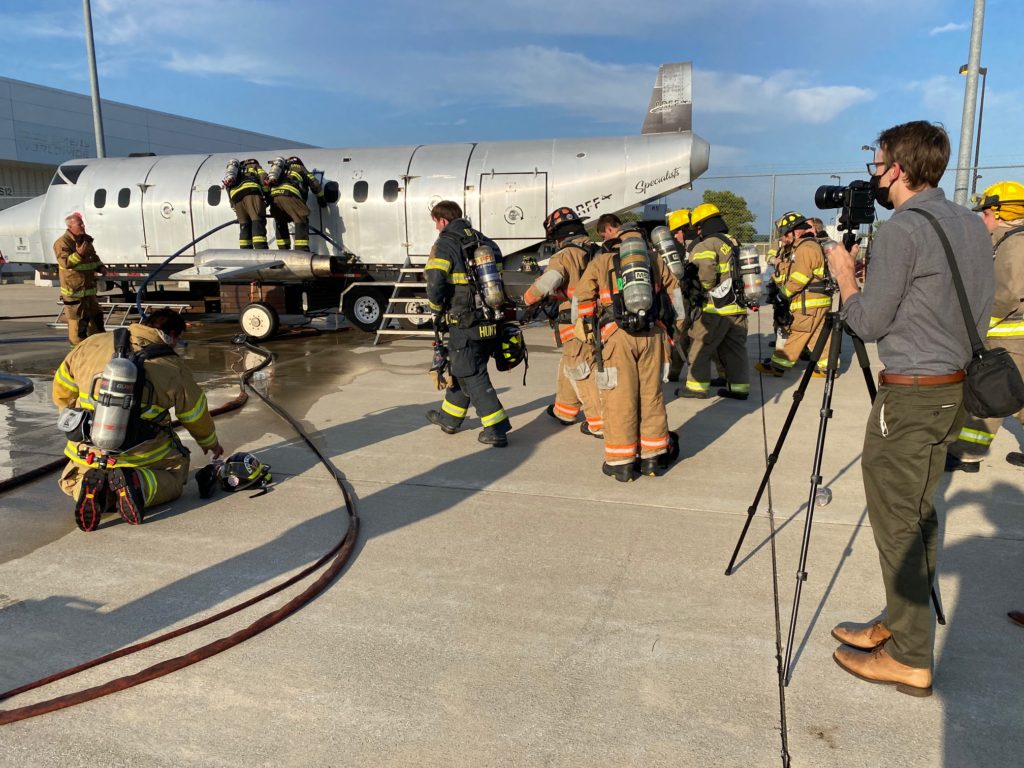 In a normal year, Ford Airport would have had nearly 200 participants in what I’m told is incredibly realistic maquillage to simulate injuries. But 2020 is no normal year, so we were confined to assembling no more than 100 participants for the outdoor exercise. Masks and other precautions were in place due to COVID-19, but there’s only so much you can physically distance while effectively fighting a fire or treating a burn victim.

Since we were unable to include the media because of coronavirus precautions, we had set up multiple still cameras and a GoPro around the scene to capture the action, taking care our team and equipment wouldn’t get in the way of the drill. Accompanied by Airport Business Development Manager Stephen Clark, Hunter served as our roving eyes on the ground, getting very close to the first responders and the injured.

Still, I wasn’t prepared for the call from Public Safety & Operations Director Lisa Carr, sharing details about emergency operations command and asking me to repeat them before requesting a media statement.

Muscle memory kicked in – honed by drills from my journalism professor and friend, John Waller, deadline writing as a reporter for The Grand Rapids Press and more than two decades of responding to client calls. Within a few minutes, I had drafted a statement and shared it with Brian, who made a few wise tweaks before I shipped it off to Lisa and Stephen. I then batted out a dozen or so questions we would need to have answered and made recommendations on next steps for media communications as the drill continued.

I often talk about what we do in terms of fire. My team – and many of our clients – have heard it for years: When you’re in a crisis, your hair is on fire, and you can’t think of anything else but the fact your hair is on fire. The job of SPR is to come in, help you put out the fire and then mop up the mess.

This was one of the few times, though, when I was actually AT a fire and being called on to craft a media response on the spot.

The exercise finished, and my team and I went back to filming, capturing images and interviews that would later be pushed out to media who were unable to attend the drill and on the Airport’s social media platforms. It was impressive and inspiring for my team and I to watch the various departments and agencies come together quickly and without ego to respond.

As Jason Russell, the founder of Secure Education Consultants, is fond of saying: You don’t rise to the occasion, you sink to the level of your training. That’s why you train, so that when the adrenaline kicks in, your muscle memory takes over and you are able to respond – whether that’s putting out a fire, caring for the injured or preparing a media statement. 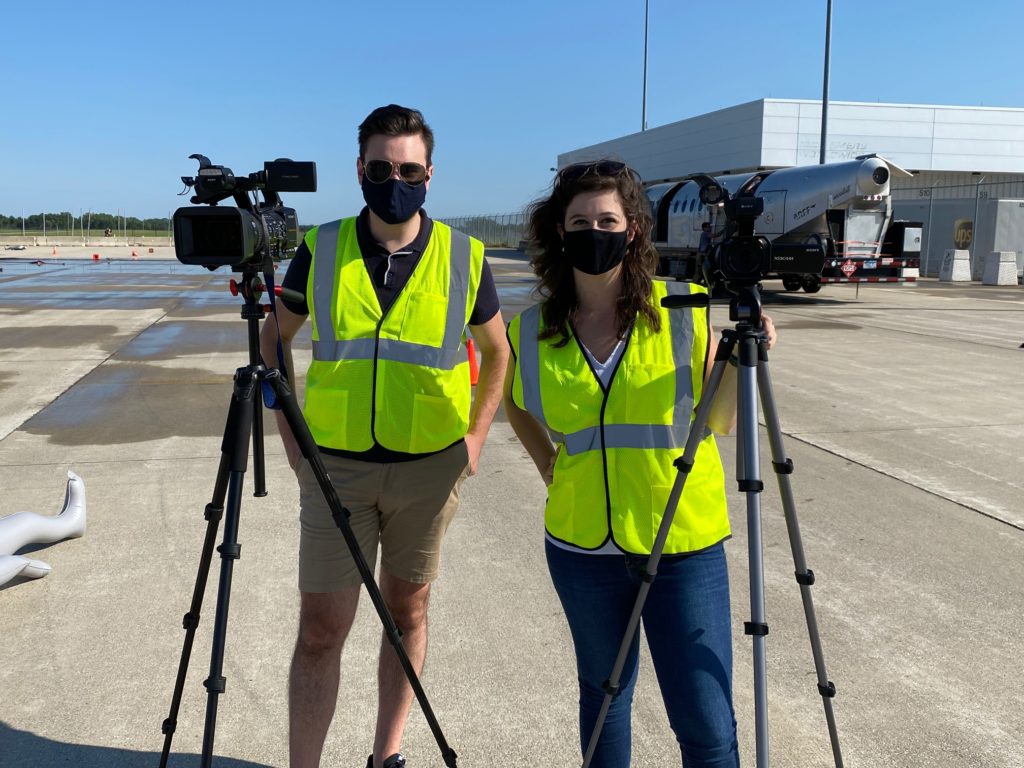 What the team said:

Chiara: Being part of and watching Friday’s exercise was a great experience because it once again reminded me how quickly things happen and need to be resolved in a crisis situation. The experience reinforced the incredible value of simulating and discussing crisis situations to be better prepared for them — the more we practice and evaluate, the better we can adapt and respond when it happens in real life.

I enjoyed grabbing footage of this event because it challenged me to not only dust off some of my videography skills, but evaluate what was most important to capture in the moment rather than remembering afterwards when it’s too late.

PR aside, it also made me feel so grateful that there are men and women who volunteer to go into legitimate fires to help save lives and that drills like these are performed regularly. 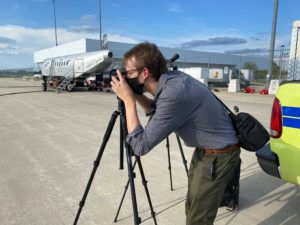 Hunter: Being involved in the airport’s emergency exercise was unlike anything I’ve been a part of during my career so far. Not only did I get to experience what it would be like to film an action movie, but I really got to see the airport and its partners’ months of hard work and crisis planning come into fruition.

As Cascade Fire Chief Adam Magers said after the smoke cleared: “People don’t realize how much planning goes into an exercise like this, even the small things.” I think that’s true with every crisis situation – it often takes a village to prepare for crises, but every second of planning is worth it to achieve desirable outcomes, much like the airport did.

I also admired the airport and its partners’ focus on taking a step back and looking at how they can improve for the future. During our post-exercise interviews, every participant mentioned how they could improve during the next exercise, even if they were just small details. It’s that kind of commitment that makes exercises like this so invaluable.

As always, I’d like to give a shoutout to the brave firefighters in West Michigan and around the world – your dedication to the safety of your communities is an inspiration to us all.

2 thoughts on “Muscle memory: The critical importance of training for crisis response”