What’s in a name? A lot, actually.

Contrary to Juliet’s long-winded and desperate rant about Romeo’s separation from being a Montague — it’s okay, we’ve all been dramatic teenagers — there is actually quite a significant tie between a name and one’s identity.

While of course not everyone likes their birth name and goes by a nickname, a middle name or legally changes it all together, we choose what to go by because it’s a huge part of who we are. This also explains why getting a character’s name right to match their personality in a movie, book etc. is essential. Voldemort literally translates over from French to mean “flight from death.” You see what I mean?

As someone who’s name has been butchered for my entire lifetime and also frequently autocorrects to chair, this one sits close to home. In Italian, Chiara means light and is the equivalent to the English Claire. While my name matches my very pale complexion, it also resonates deeply with how I would describe my personality. 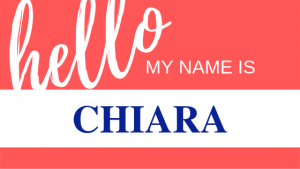 However, in the past I’ve gotten so exasperated with people not caring to learn it correctly I’ve just allowed them to pronounce my name however they’d like. In fact, I’ve even met people who share my name who have changed their spelling so that people get it right on the first try.

This is not an okay practice. No one should have to accommodate others for their laziness or ignorance in something as simple as getting their name right. Waving it off with the excuse that “it’s too hard” is quite frankly, flat out rude.

If you’re one of those people who struggle with names or aren’t sure what to do in similar situations, here are some to-dos and not to-dos for navigating the name game:

When you don’t know how to pronounce someone’s name

While getting someone’s name wrong the first time isn’t offensive, repeatedly using an alternative or pronouncing it incorrectly after you’ve learned how, is. So how do you fix this? Ask. If you’ve already met someone and are still unsure, ask again and recognize that you’re trying. People will be so much more grateful to you than hearing their name mispronounced for what is sure to be the trillionth time in their life.

Using the Name You’ve Been Given

This one is pretty straightforward. If someone asks to be addressed as a Thomas rather than a Tom, address them that way. It’s not up to you to decide what they go by. In fact, your inability to follow their direction shows the little importance you’ve placed on their right to go by whatever they’d like.

This can also easily be applied to pronouns. Increasingly integrated in our society is the recognition of gender pronouns when introducing yourself. I’ve seen these most popularly on email signatures and on name tags. If someone specifically asks you to refer to them as they/them rather than he/she or him/her, then so be it.

There’s no doubt that there is an overflow of information we process every day. Remembering people’s names — especially those who we run into every few years or know because they’re a friend of your uncle’s car guy — can be difficult. But when we have the technology to find out your cousin’s friend’s ex-girlfriend’s puppy’s name is in a heartbeat, there is little excuse not to figure it out and remedy the situation.

If you do end up in one of these awkward situations, I’ve found two solutions work well. The first is to just jokingly address that you’re an idiot/having a moment, apologizing and finding some comedic relief. The alternative is to play it completely cool by excusing yourself to the bathroom to look up them up on social media or to ask a friend. The trick with the latter, however, is that you have to be very casual and smooth — mess it up, and you’ll make a fool of yourself.

If you’re bad at names, practice learning them by remembering something about them and making an association rather than repeating it over in your mind over and over again. Or even better yet, if you’re struggling because their name is not the traditional American Marie, Catherine or Elizabeth, learn a little bit about their background/culture and how their language works. It’s a win-win situation.

If you take away just one thing from this blog today, it should be this: if Mary Ann is a Mary Ann and not just a Mary or just an Ann, call her Mary Ann.