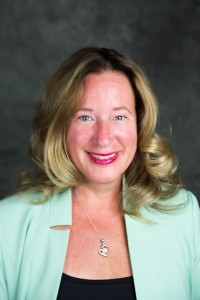 For nearly 20 years, Denise Kohler-Kolesar of Kohler Expos has been following a magic formula of connecting with people on a personal level. This mantra endears her to legions of businesses and individuals eager to showcase their products and services at any one of eight expos Denise and husband, Brian, stage in Lansing and Grand Rapids.

And constantly seeking signs from above doesn’t hurt, either.

Such faith was instilled in her as a child, growing up the fifth of eight children raised by Bernard and Mary Kohler in the Eastern Michigan town of North Branch.

“My dad was in the insurance business, and later served as mayor, then owned other businesses with his brothers – a grocery store, car wash, movie theaters. And there was an intentional concept – to employ their children so they always had a job.”

In fact, Denise remembers being responsible for her own expenses as far back as the fourth grade, when she started pitching in to earn her way. “There was work if you wanted it, and if you didn’t work, you didn’t get anything.”

That work ethic stuck. So, too, did a penchant for serving others. And it began close to home, and at an early age.

“My father had a heart attack at 37, and later a stroke, so I became his right-hand person. I was expected to open the insurance office, and I’d visit him bedside in the evening to find out what to do the next day.”

Bernard continued to serve his community as county commissioner, even while partially paralyzed. Denise’s challenges were compounded when her mother contracted cancer. For five years, she and her siblings – now grown and scattered throughout four states – rotated to spend time at the homestead, caring for their parents. They died 12 weeks apart.

To this day, they serve as her greatest role models and mentors, because they handed down to her the value not only of hard work, but the rewarding ripple effects that emanate from investing in people.

“Contributing to community has always been a part of my life,” Denise says, “helping to make things happen for others.”

In high school, she was the over-achiever who scored reasonable grades and also served as cheerleader and drum major, mastering the art of twirling batons while they were on fire. “One of these days, I have to haul those batons out,” she says. “I think I’ve still got ‘em.”

Denise admits she was a goody two-shoes during her schooldays, and that meant standing up to bullies. “I would have never stood on the sidelines if someone was being teased,” she says. “I’m not a big person – I stand but 5 foot – but I didn’t care. I stood up to people.”

She stands up for her country as well. “I used to make our kids say the Pledge of Allegiance before school, and because the neighbor kids gathered on our porch in the morning, they said it, too.”

After graduating North Branch High School in 1979, Denise freelanced as a court reporter for two years. At one point, her work ethic nearly did her in. “I worked on my wedding day,” she says. “A firm needed me, and I couldn’t say no. I worked in my wedding dress. And for those two years, I worked 90 hours a week.”

Mercifully, she left that job and signed on with John Loeks, serving as his personal assistant, learning the movie theater and trade show business.

It was prayer that convinced her to start her own business in 1998 – Kohler Expos – involving her husband, Brian Kolesar, as partner. Their first venture together was a Women’s Expo in Lansing. Over time, they’ve extended their reach through a total of eight annual shows – two Women’s Expos, three Bridal Shows, a Kids & Family Expo, and a pair of West Michigan Mom’s Sales that debut in Grand Rapids each spring and fall.

Preparing for those eight dates is a year-long task that requires complicated networking and precision planning. And being consumed by a quest for perfection, Denise is constantly seeking ways to improve the shows and its offerings.

In what little spare time she has, Denise enjoys spending time with family at the home in North Branch, now owned by a sister who keeps a bedroom intact for everyone who ventures back for visits.

She and Brian also own an 80-acre farm just outside the town where she grew up, and it boasts a barn refurbished by Amish craftsmen that now serves them as a country getaway. She calls it their “Babin,” because it’s “part barn, part cabin.”

These days, though, she’s attending to the upcoming Women’s Expo in Grand Rapids, set for March 11-13 at DeVos Place. The Spring Bridal Show runs concurrently at the same location March 12-13.

For a full slate of offerings at both – and a closer look at the other shows featured throughout the year – visit KohlerExpo.com.

And keep your eyes peeled for a diminutive woman throwing flames. “I was really something in the dark,” she says with a laugh – “twirling that baton on fire, marching with folks who had flashlights taped to their ankles.”