Michael Young had every intention of taking his wife of 25 years out to celebrate her birthday this past Wednesday.

Instead, he succumbed to the effects of a stroke that nobody ever saw coming.

Three days later, Melissa was lifting a quivering chin to announce that the day of her birth will be replaced with commemorating the memory of her beloved. And as for her birthday, it will hereby be celebrated on her half-birthday, July 27. 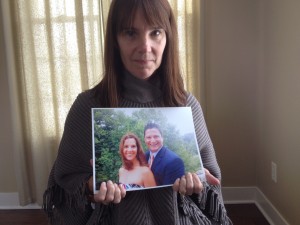 The way her Michael lived his life.

By day, he was a man who sometimes willed into effect a Rockford to replace the one he was given over to tend as City Manager some 20 years ago. He knew the power of collaboration, but he also made his vision known.

Still, tender was the night. Those times were reserved mostly for wife, Melissa, whom he met while both were in the 8th grade – and a trio of kids that he lovingly cloaked in nothing but superlatives: Michaela, now 24, Mackenzie, 23, and Jake, 17.

Michael understood the importance of work-play balance, realizing that at day’s end, career took a backseat to family.

As a newspaperman once told by an older colleague that I should avoid getting chummy with the people I covered, I flunked that assignment when it came to Michael Young.

We both moved into the City of Rockford at roughly the same time, and I found it virtually impossible to not befriend him. We shared the same faith, fascination with sports, dedication to family and love of community.

When he died last week, I grieved alongside countless others who considered him the same way – as a kid sometimes trapped in a grownup’s body who celebrated life with uncommon vigor.

The last time he was at our home, it was to attend a quirky home-jewelry party I was hosting for guys looking to splurge on something for their wives for Valentine’s Day.

Michael and I ended the evening by roughhousing in the front foyer, testing our old-man strength. I’d been a swimmer all the same seasons he wrestled, so it was no contest.

I went with him to Lions games, and watched his fervor never fade for them as underdogs. We attended our kids’ open houses. And for 10 years straight, Michael and I paired up for charity to plunge together into the icy Rogue River for the town’s “Sweetheart Splash,” warming up in the back of a fire truck with towels and a swig of bourbon.

Over the course of many meetings – both planned and spontaneous – I came to know a man who lived life large, and largely on behalf of others. He had a plan for Rockford, promoting a stunning riverwalk and green spaces and thriving commercial and industrial centers.

He collaborated – and at times clashed – with city council and city workers and business and community members. His detractors would argue that his vision and methods didn’t fit with theirs. But that’s the nature of cities both big and small – and people in power. He wasn’t going to please everyone. Unlike steely municipal leaders in other locales, though, it truly bothered him when he wasn’t batting a thousand.

I sat with him in his office for more than an hour recently, and he poured out his frustration about not being able to make everyone happy. I reminded him that sometimes, a minority can create a profound presence. And that most people appreciated his diligence. Still, he felt wounded by personal attacks that all politicos endure. “It hurts,” he said.

But his wife, Melissa, reminded me that he was also fiercely loyal to others who didn’t play a part in Rockford affairs. His beloved brother, Jeff. A friend from his childhood days in Grand Haven named Scott Miller. And too many more to list.

Culture is how a place feels, and Michael helped design and create a feeling of community and belonging within a city busting out in a dozen different directions. He took the job at the age of 28, a kid in the lion’s den. But he rarely flinched.

When he wasn’t improving the city, he was extolling that family of his.

Once, while driving home with him and two others from Detroit, he asked if we’d slow down. “Melissa would want a picture of that,” he said, snapping a photo of some cityscape.

He and Chief Jones joined every Christmastime to go shopping for their wives.

Each summer, Michael crewed aboard a yacht for his uncle, who loved entering his craft in races across Lake Michigan.

He was heavily involved in wrestling – having earned a full ride as a student to compete at Grand Valley State University – then staying close to the mats to both coach and referee.

So he ran in a lot of circles.

But the thing his family will miss most is his love and devotion.

“For his friends,” said Melissa, “he would walk on hot coals for them.” And as for family, “He taught us the true meaning of unconditional love, and he taught it to us all.”

The mantra he maintained for the whole family? “Youngs never quit.” When he figured Jake could do better in school, he visited his son’s teachers and encouraged them to make him work harder. Jake smiles to remember. “I was OK with it.”

Christmastime was his favorite time of year, and it showed throughout the City and throughout their home. He wouldn’t allow a single gift to be opened until Christmas morning, and as for decorating the City, well, the lights go up around Thanksgiving – and they’re still up as you read this.

Says Mackenzie, “He wanted to keep a Christmas tree all year ’round.”

For a guy who eschewed reading, much less poetry, Michael wrote some pretty endearing stuff, keeping a journal that he dedicated to the kids. He’d make entries toward days’ end, and ask Melissa to transpose his notes into the binder.

This past Saturday afternoon, Michaela lifted it in trembling hands and read passages that made her cry. There were references to the daughters as “buttercup,” and a line where he swooned over the birth of one of them into the world “as a beautiful song I had never heard.” 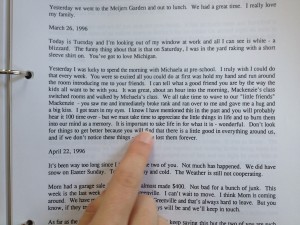 Some might be surprised at the ways he doted. During trips to the grocery store, he’d usually pick up a magazine or candy for Melissa and the kids. “For the longest time,” said Melissa, “I thought that was something that all husbands and fathers just did.”

He wasn’t afraid to cry, reserving most instances for times of joy. When Michaela’s boyfriend approached to ask her hand in marriage last year, both men ended up in each others’ arms, sobbing.

A few months back, he surprised Melissa with a ring to celebrate their silver anniversary. “Here he was, just crying,” she says, and telling me that ‘I’d marry you all over again.’”

Michael was a Lions fan through and through, and marked the beginning of each season by marching – “yes, marching,” says Melissa – a Lions flag out to their flagpole. One season, he burned it out of sheer frustration, then flew it anyway, to demonstrate he was hooked on his heartache team no matter what.

He didn’t ask for much from his family, but when he wanted something, he wouldn’t leave it alone. “He’d get this smile on his face, and it was just like a little boy’s,” says Melissa, “and he’d always get what he wanted.”

That would include a stray kitten that entered their world against Melissa’s initial refusal. “I was so ticked, I didn’t talk to him for half a day.” But the kitty stayed.

Michael loved his music – The Stones, Jimmy Buffet, Elvis, Sam Cook – and the beloved medley of “Somewhere Over the Rainbow” and “It’s A Wonderful World” as sung by the late Israel Kamakawiwo’Ole.

Early last year, I was making my way to a doctor’s appointment that would confirm I needed open-heart surgery. I told Michael I was scared of the outcome, and he reassured me that everything was in Our Lord’s hands.

We talked a long time about how as hard as we might try, we’re all frail and imperfect, and I shared that the only thing I could do as a human was continue to attend my conscience. “You gotta be able to sleep at night,” I said.

And at that point, he did the most remarkable thing. He broke into a poem by Peter Dale Wimbrow Sr. that I’d never read or heard of. Standing on the sidewalk that day, Michael Young never skipped a beat, reciting all four verses by heart.

“The Man in the Glass” by Peter Dale Wimbrow Sr.

When you get what you want in your struggle for self
And the world makes you king for a day
Just go to the mirror and look at yourself
And see what that man has to say.

For it isn’t your father, or mother, or wife
Whose judgment upon you must pass
The fellow whose verdict counts most in your life
Is the one staring back from the glass.

He’s the fellow to please – never mind all the rest
For he’s with you, clear to the end
And you’ve passed your most difficult, dangerous test
If the man in the glass is your friend.

You may fool the whole world down the pathway of years
And get pats on the back as you pass
But your final reward will be heartache and tears
If you’ve cheated the man in the glass.

One thought on “Remembering Michael Young — A Legacy of Loyalty, Laughter & Love”